What is a screw jack?

A screw jack is a type of mechanical lifting device or jack that is used to apply great force with the help of small effort to lift heavy weights such as vehicles and as adjustable support system for heavy loads like foundation of houses. They are also used to pull, push, tilt, roll, slide, lock, unlock, lift or lower position, align and hold extremely heavy load, from a few kilos to thousands of tonnes.

A screw jack system includes essential components such as heavy-duty vertical screw or power screw (leadscrew) with a load table mounted on its top, a worm or bevel gearbox assembly, and a motor to provide rotary motion. The screw jack is operated by turning the vertical screw or power screw with the help of gear system and motor, to convert rotary motion into linear motion.

What is the principle of screw jack? 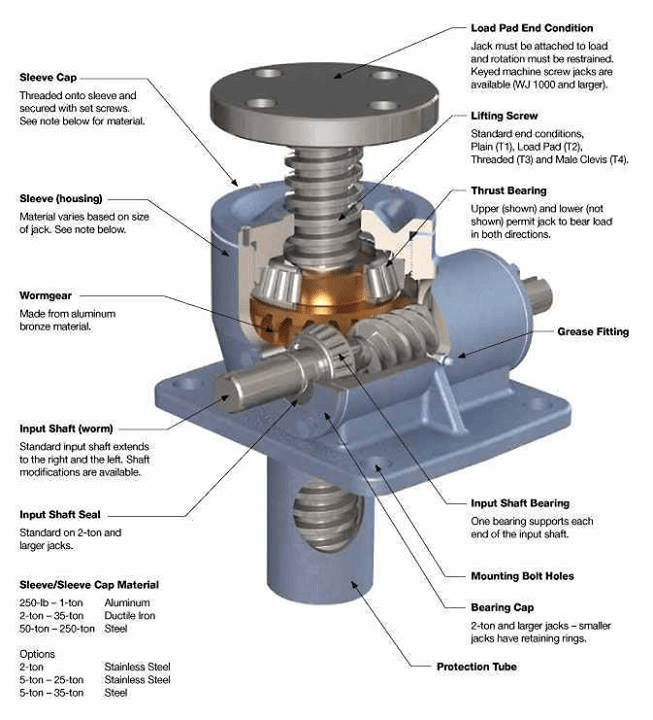 The principle on which a screw jack works is similar to the working principle of an inclined plane. In an industrial screw jack system, a worm screw is rotated by a motor which then rotates a worm gear. After that, a heavy-duty vertical lifting screw or power screw moves through the rotating worm gear, converting the rotary motion of the motor to liner motion. The speed of the lifting screw’s linear motion depends on thread size and rotation ratio of worm gears. A screw jack’s mechanical advantage (MA) is the ratio of the load applied to the effort applied.

How many types of screw jacks are there? 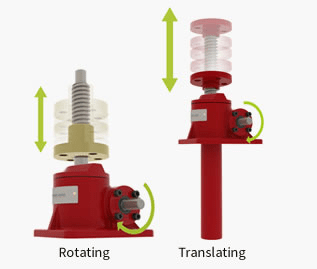 We are famous for our high quality worm gear screw jacks.

What are the uses and application of screw jack?

The screw jacks have high friction and low efficiency because of the extensive area of sliding contact between the screw threads. Due to this they are not used for continuous high power transmission, but they are widely used for occasional positioning of heavy appliances.

Screw jacks have high tonnage lifting capacity that blend loading with precise accuracy. They are highly reliable and synchronized, which make them suitable for a broad range of application where alternative methods of handling is not achievable. Some of the heavy duty applications are — lifting heavy vehicles, water processing, as actuators in industrial applications, steel works equipment, automated machinery, pharmaceutical industry, medical and laboratory equipment, packaging equipment, general machine handling, in electronic connectors, nuclear and aerospace handling and so on.